Hundreds of protesters camped outside City Hall are demanding that lawmakers slash the New York City police budget by $1billion.

The protesters are part of a national ‘defund the police’ movement seeking more spending on other needs like housing and education and say they won’t move until they see a budget cut.

It comes as violent crime in New York City skyrockets, with June now on track for the highest number of murders in a month since 1996.

Police officials warned the budget cut would come at a time when the city has seen a surge in shootings during the first three weeks in June. 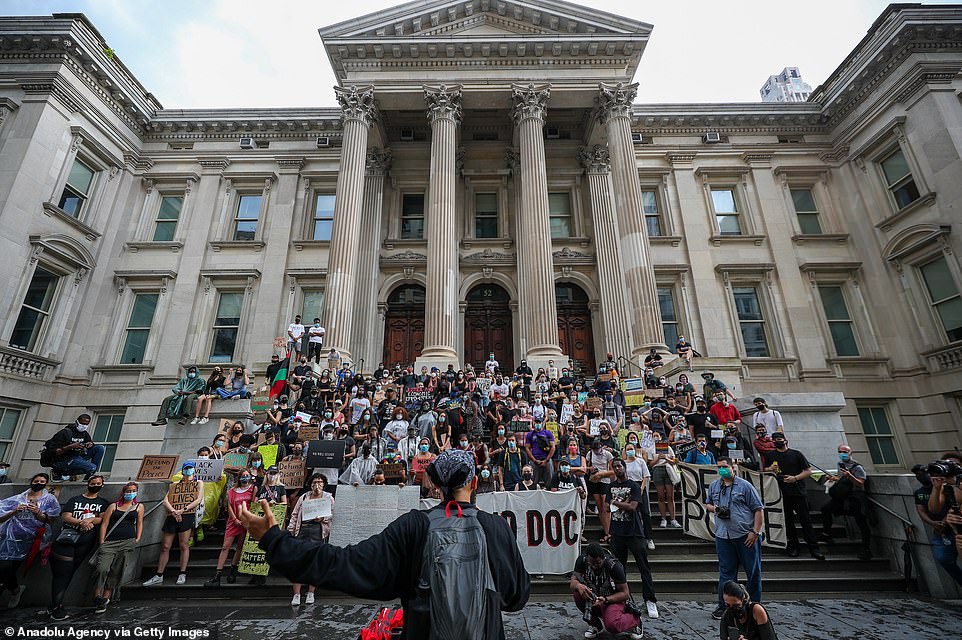 Protesters sit at the stairs of Tweed Courthouse as hundreds congregate at the New York City Hall as part of the ‘Defund NYPD’ and ‘Occupy City Hall’ movement. The encampment is now in its fifth straight day of camping outside the building 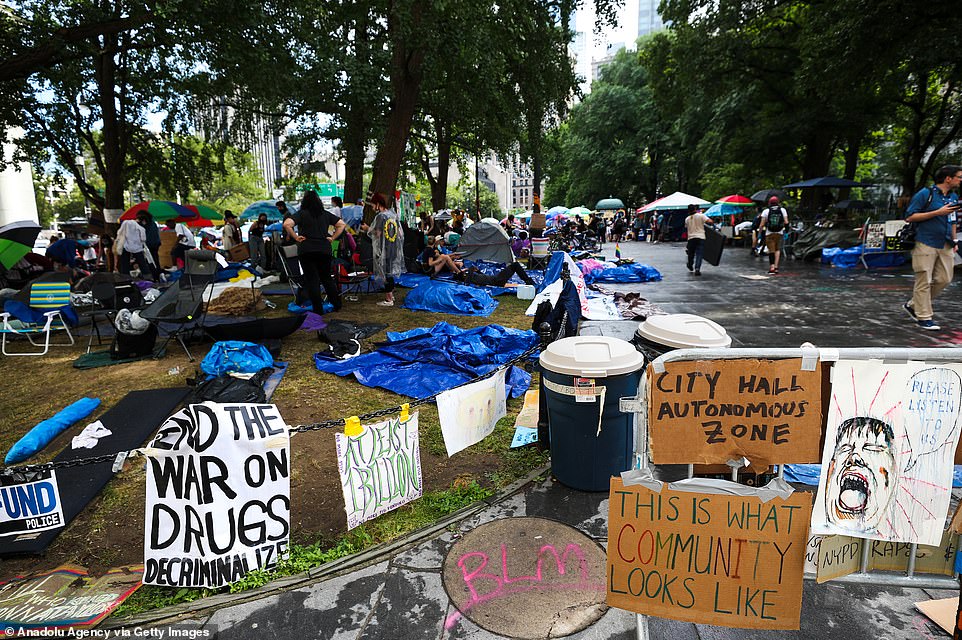 Hundreds of protesters camped outside New York City Hall are demanding that lawmakers slash the New York City police budget by $1billion. The demonstrators have dubbed the area ‘Occupy City Hall’ and say they will stay until a cut is approved 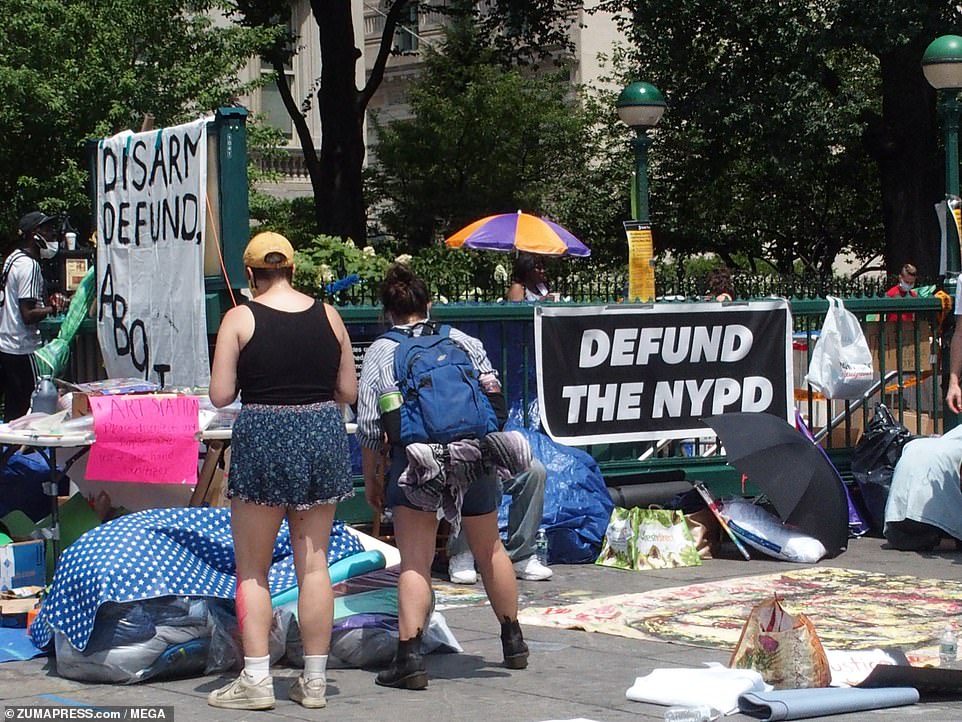 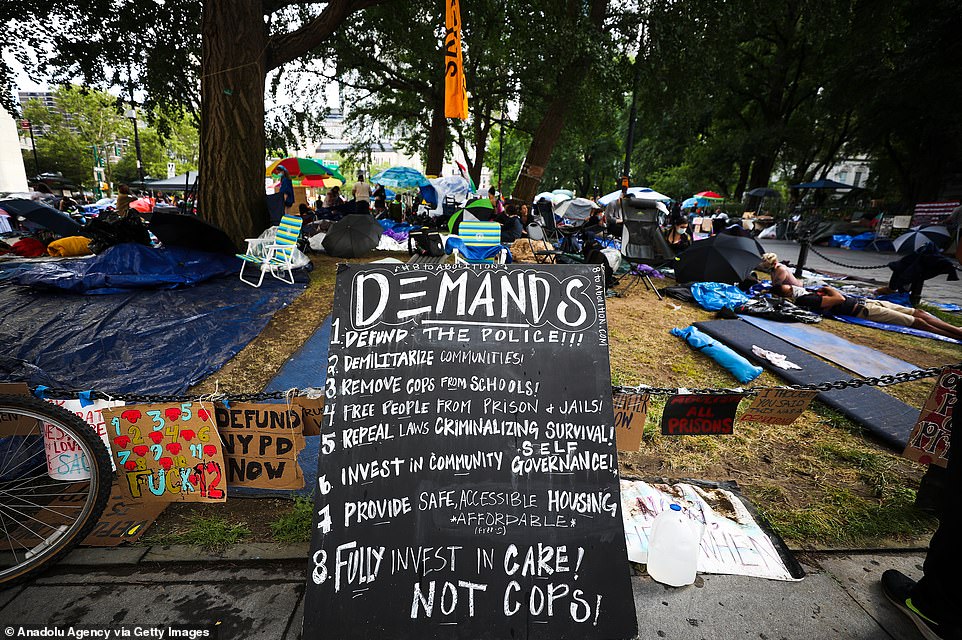 According to NY1, protesters have designated the area police free, and say officers have been keeping their distance.

The encampment was told it is allowed to remain and protest as long as no structures were set up, the New York Post reported.

Organizers have called it ‘Occupy City Hall’ – a nod to the 2010 Occupy Wall Street movement a few blocks away in Zuccotti Park. 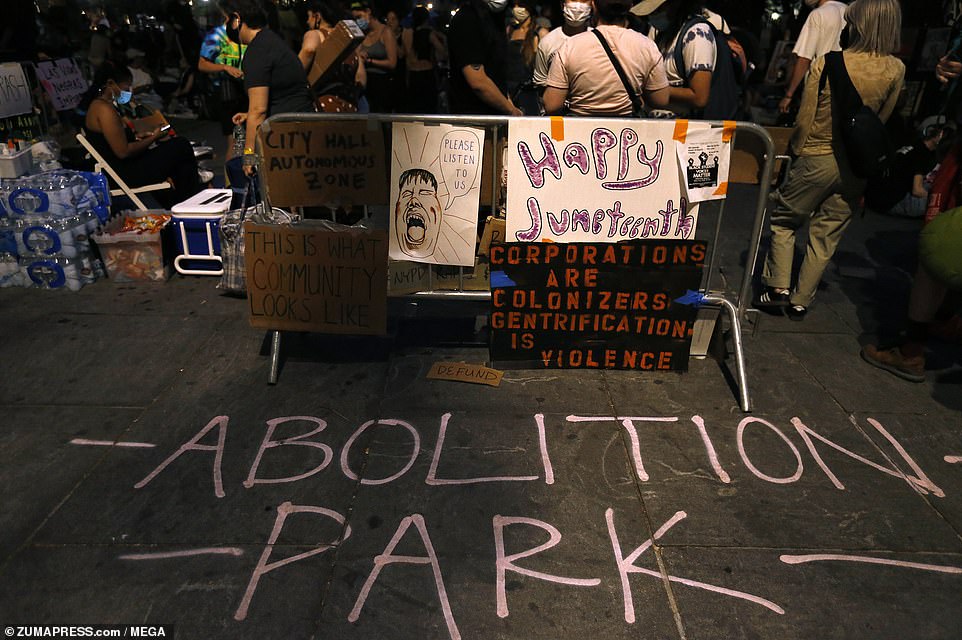 At one of the entrances to ‘Occupy City Hall’, Abolition Park has been painted on the ground outside a barrier 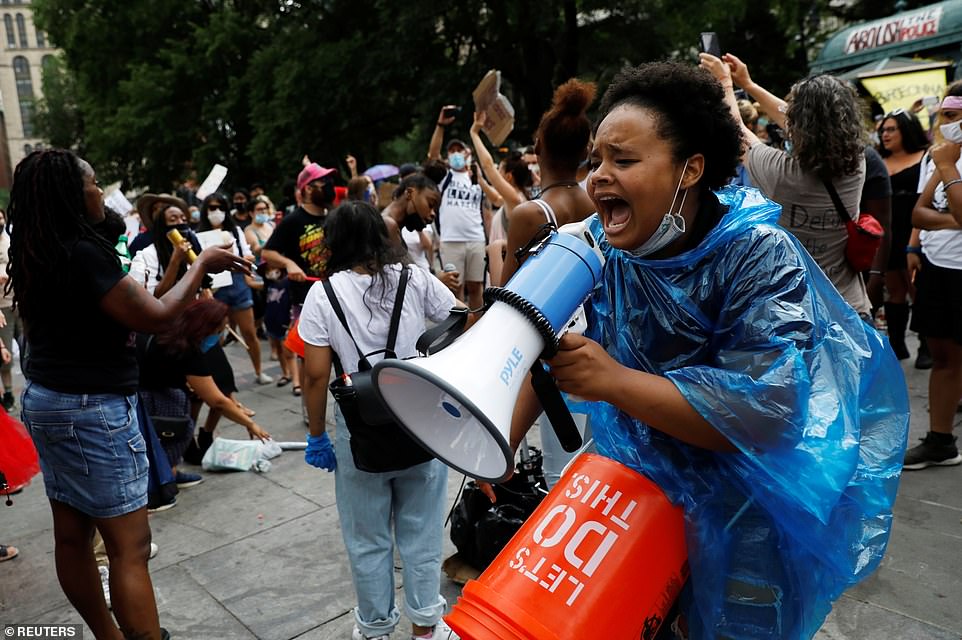 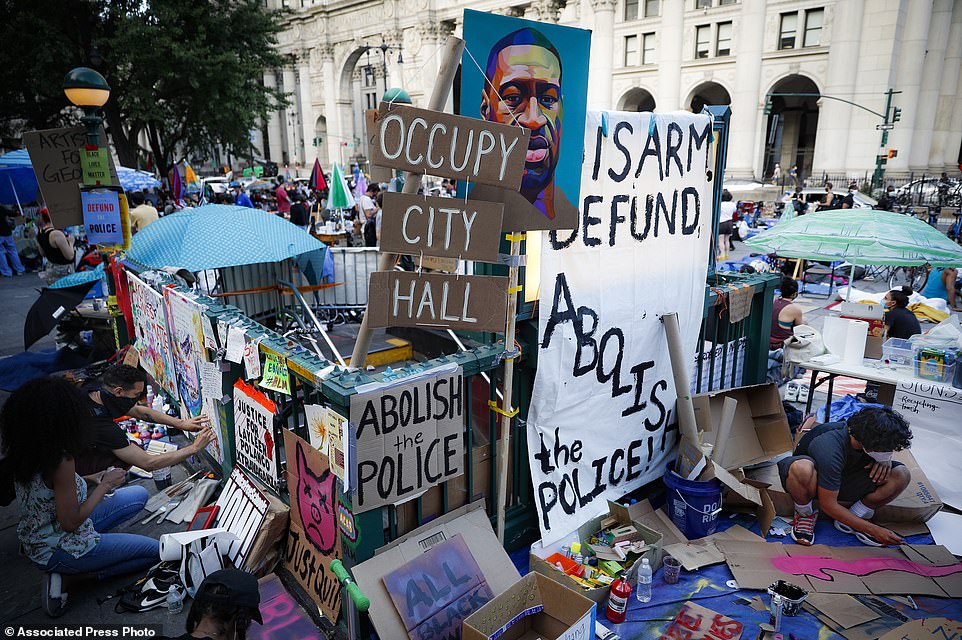 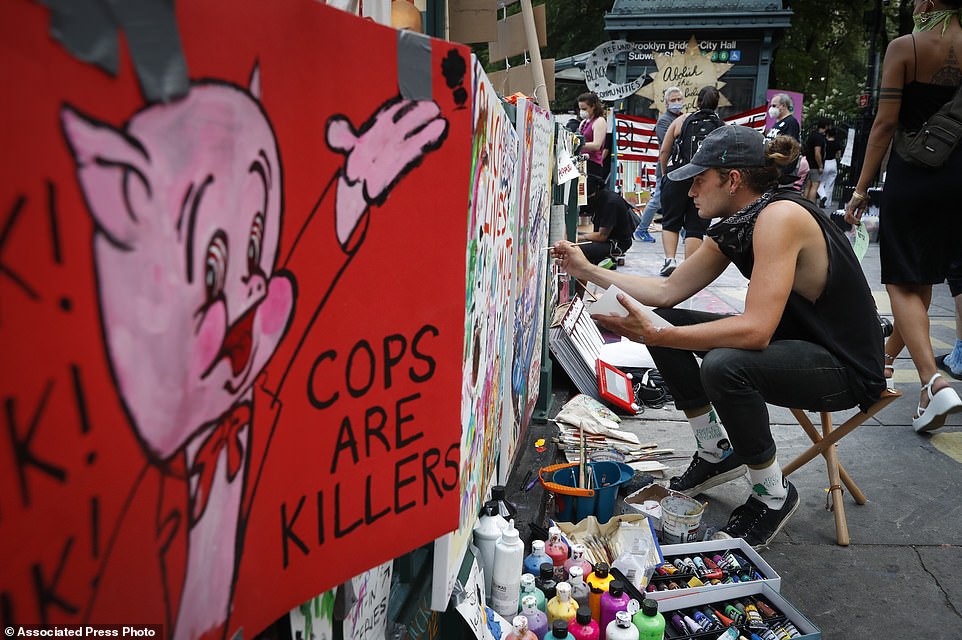 On Saturday, the fifth straight day of the encampment, a large group gathered on the steps of Tweed Courthouse near City Hall, all wearing face masks and holding signs reading ‘Defund the Police’.

A short distance away, rows of umbrellas, chairs and ground coverings lined the area where the protesters have parked out.

De Blasio said that funds cut from the city’s police budget would be diverted toward youth services and other unspecified ‘community needs’.

‘We’re working with the City Council right now. We don’t have a final dollar figure, but we’re going to do something very, very substantial,’ de Blasio told WNYC-FM on Friday.

‘We’ll know more in the next few days,’ he added. ‘I think we are moving in a very good direction.’

The NYPD says 272 uniformed cops filed retirement papers from May 25 through June 24.

That’s a 49 percent spike from the 183 officers who filed during the same period last year, according to the department.

The barriers around the new zone are lined with more posters calling for the police to be abolished, as well as tributes to George Floyd, whose death sparked the recent surge in the ‘defund the police’ movement.

‘Abolition Park’ is painted on the ground at one entrance to the area.

Protesters who gathered earlier in the week had put out calls for sleeping bags and other supplies as they urged others to join them.

The camp has grown to hundreds from 100 demonstrators on Tuesday night.

Volunteers have also joined to hand out face masks and hand sanitizer.

In one area, the NY Post reported that a herb garden had been started.

‘Everybody’s really dealing and going through the motions together and this is very therapeutic,’ one protester told NY1.

‘We’re not tired, we’re not exhausted and these things need to happen,’ another said.

‘These things need to be shown to the world that it is not ok for us to go back to a state of normalcy, for us to be in a position where we have to be out here for hours and days on end, sleep and food deprived and taking care of one another, for there to be justice and equality in our system and in America.’

While the main call is to defund the police, other demands include taking cops out of schools, providing affordable and safe housing, and freeing people from prison and jails.

‘We’ll stay here as long as it takes,’ Williams said.

‘The people that can actually defund the police are negotiating the budget this week.

‘And you know where they are? They’re right there in City Hall.’

Mayor Bill de Blasio has committed to reducing the police budget, but hasn’t said by how much.

On Friday, he announced that he is finalizing ‘very substantial’ cuts to the NYPD budget, even as skyrocketing police retirements raised questions about adequate staffing. 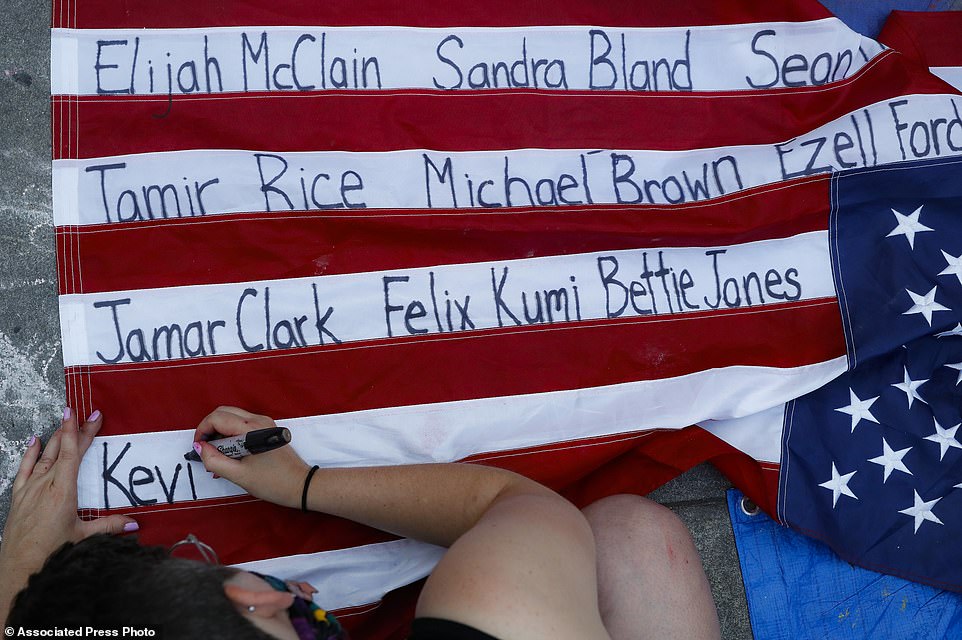 A protester at an ‘Occupy City Hall’ encampment outside New York City Hall writes the names of individuals killed in incidents involving police. The protesters are demanding that $1billion be cut from the NYPD’s $6billion budget 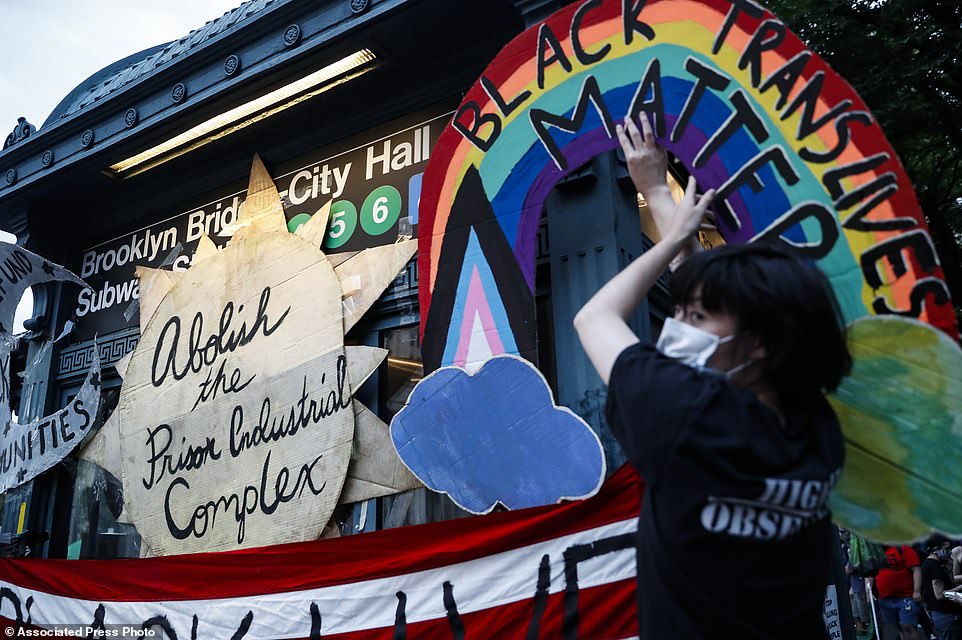 Protesters have covered the ‘Occupy City Hall’ zone with signs. The have been told by law enforcement that they can remain in the area peacefully protesting as long as no structures are set up. They are sleeping on plastic sheets and under umbrellas 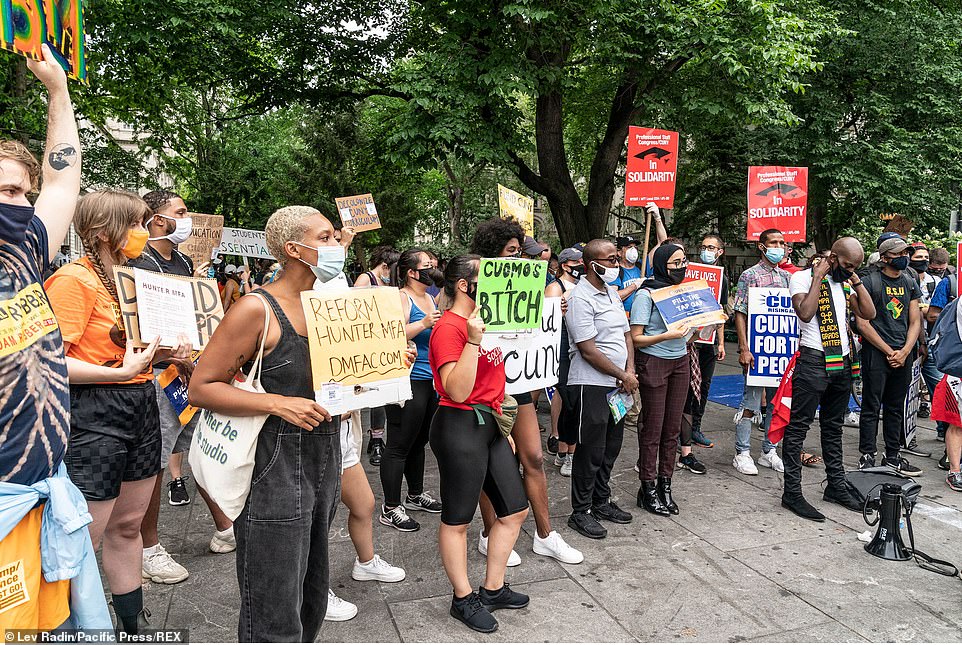 The protesters return to stand outside City Hall from the encampment each day. It is now in its fifth day 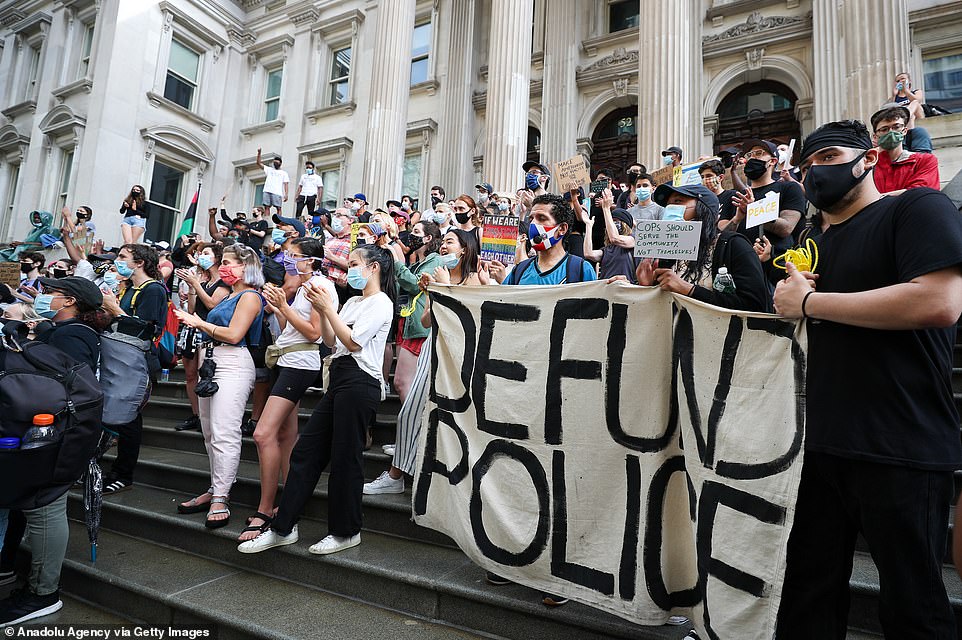 Protesters sit at the stairs of Tweed Courthouse  on Saturday next to the City hall as hundreds of them congregate as part of the “Defund NYPD” and “Occupy City Hall” movement. The protest demands cuts to the NYPD budget

‘We’re working with the City Council right now. We don’t have a final dollar figure, but we’re going to do something very, very substantial,’ de Blasio told WNYC-FM.

‘We’ll know more in the next few days,’ he added. ‘I think we are moving in a very good direction.’

New York City Council Speaker Corey Johnson has also called for the NYPD to be defunded by $1billion.

The city budget is due June 30.

It comes as violent crime has also skyrocketed in New York City, which is on track to see the highest number of murders for the month of June since 1996.

In the past seven days, the number of shooting victims in New York was up 400 percent from the same period last year, according to NYPD stats.

Police Benevolent Association president Patrick Lynch said cops are ‘at their breaking point, whether they have 20 years on the job or only two.’

‘We are all asking the same question: ‘How can we keep doing our job in this environment?’ And that is exactly what the anti-cop crowd wants,’ the union boss added.

‘If we have no cops because no one wants to be a cop, they will have achieved their ultimate goal.’

Ed Mullins, president of the Sergeants Benevolent Association, also warned that an ‘exodus’ from the NYPD has begun.

He said nearly 80 of his members have recently filed for retirement, and that morale is ‘at the lowest levels I’ve seen in 38 years’. 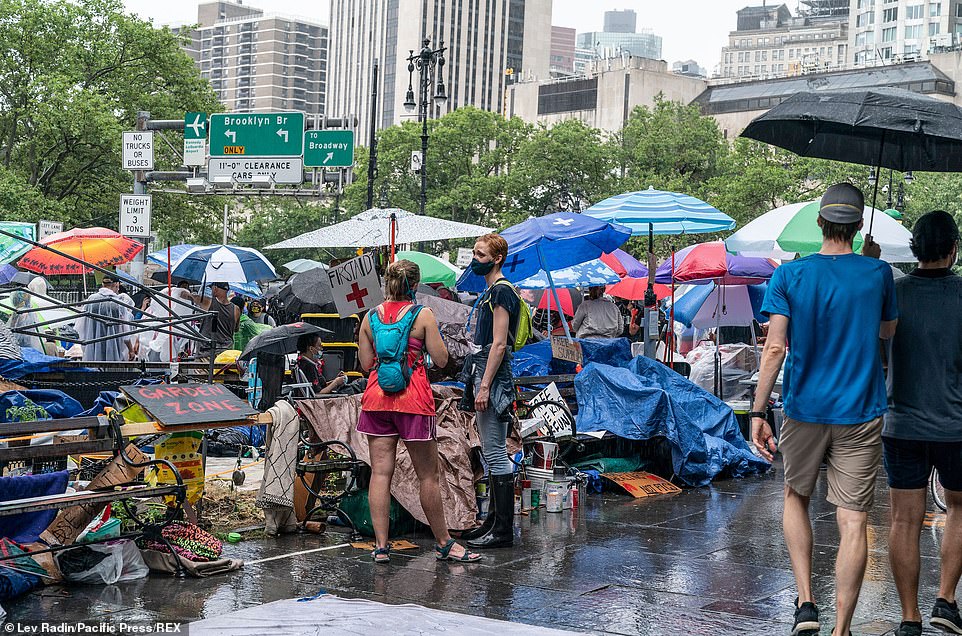 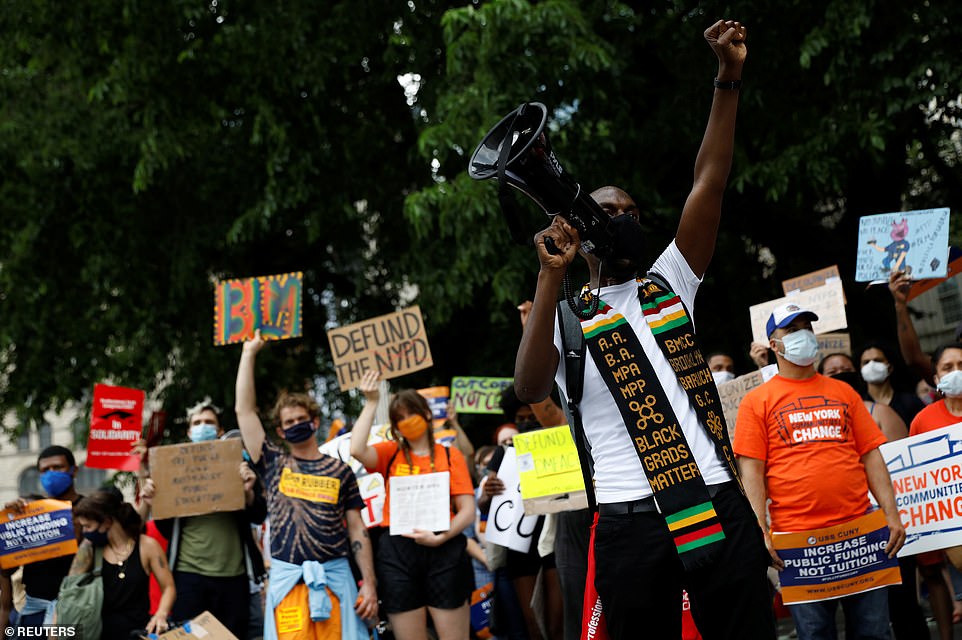 ‘People have had enough and no longer feel it’s worth risking their personal well-being for a thankless position,’ he added.

‘There is no leadership, no direction, no training for new policies,’ he said. ‘Department brass is paralyzed (and) too afraid to uphold their sworn oath in fear of losing their jobs. Sadly, the people of this city will soon experience what New York City was like in the 1980s.’

The recent calls for the defunding of police come after the death of George Floyd in Minneapolis sparked worldwide protests.

Floyd, a black man, died on May 25 after a white Minneapolis police officer pressed a knee on Floyd’s neck even after he stopped moving and pleading for air.

Four former police officers have been charged in connection with his murder.

His death prompted global demonstrations about police brutality and slayings of people of color.

In Minneapolis, the city council has voted to abolish the police department and to replace it with a new community-driven system.

Coronavirus: Leicester could be forced to lockdown 'within days' as global cases top 10m

Coronavirus: Leicester could be forced to lockdown 'within days' as global cases top 10m